From One Chevy Tri-Five Enthusiast To Another!

Roaring Back to Life

After finally getting all the parts together, I was down to the last nut on the fan. Then oops! Afan stud snapped. So it was back to the parts store to get a fan stud. I managed to find a fan stud kit for GM’s in the Help! parts section. I grabbed that and decided to replace them all, just in case.

Finally, I was ready to fire up the engine. But it would only crank. I realized it was probably out of gas, so again, I had to run out for a couple gallons of gas.

Now it was ready to start, I cranked the engine and wow! Did this sound healthy. Of course I have put the connectors from the headers to the exhaust pipes, so that gave it the healthy “take me out for a drive” sound, which I gladly obliged. I drove it straight to the gas station so I wouldn’t run out again.

Not only did the engine seem to run smoother, but with the new brake power booster, stopping the car was not such a chore anymore. I love the power brakes! 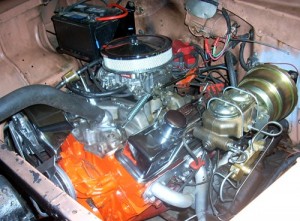 I’m still working on painting the underneath of the hood and engine compartment, so no rush driving it around. I just wanted to feel the roar of the engine in My ’55 Chevy Bel Air again….